The importance of new technologies in the study of public spaces

The use of new technologies is becoming a reality. It is already possible to find public places with free internet access, often functioning as attractive for tourists. In the very near future, probably these same technologies will be the basis for decision-making in urban planning. One of the principles of the "New Charter of Athens 2003" [1], revised by European Council of Town Planners on 20 November 2003 in Lisbon, refers specifically to the use of new information and communication technologies (ICT) to provide a variety of systems of transportation of persons and materials, and information flows. The possibility of having a tool that gives us indications as a public space is used for verifying the conditions and characteristics, and how they should be modified according to the needs of its users.

The objective of this STSM was, through the use of the application (app) WAY CyberParks, analyze the collected data, verify its contents and draw conclusions about the abilities of this app & web as a tool for verifying the usage patterns related practices / paths conducted in public spaces, and analyze the relevance of the use of the instrument and the use of ICT to improve and streamline the planning and management of public spaces. Were analyzed the data collected in the case studies in Barcelona, Carrer d’Enric Granados and Fòrum de Les Cultures (Universal Forum of Cultures), nowadays called Parc del Fòrum (Forum Park). The first, located in the center of Barcelona, is a consolidated space that was transformed to a more pedestrian use by the time of Olympic Games in 1992. The Forum it is a space created for an event in 2004, as the name implies, and is located on the outskirts of Barcelona, near the sea.

WAY CyberParks app gives us information about the routes of each user in the previously selected areas. Additionally, it allows to be use online (need internet connection) or offline mode, have possibility of launching issues to users, send suggestions about the app or/and the selected places, and use augmented reality to verify points of interest. It is expected that by using this application, can be determined what are the strengths and weaknesses of a public space.

During the stay were performed various analyzes the two selected areas in order to test the application. The investigation has shown that data collected with the app allow us to understand how the selected public spaces are used (routes, most used areas, etc.). The questionnaires launched by application, one of his last improvements, allow see what kind of users and what your opinion of a public space, serving as support for their improvement. Through the work we intended to find answers to two questions that are considered essential in CyberParks Project:

The use of new technologies is important in the study of public spaces, to quickly in an effective way, get results on the opinions of users, and how they use public spaces. In other words, you can have one of the main objectives of urban planning: the opinion of users. On the other hand, WAY CyberParks app, which is still in its testing phases, has the necessary conditions to provide support for the analysis, management and planning of public space, and may have an important role to support planners. 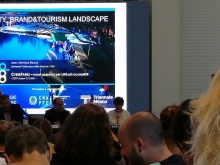